Who is Blac Chyna?

Born Angela Renee White under the sign of Taurus on the 11th of May 1988, in Washington D.C. USA, Blac Chyna is a former stripper, model, entrepreneur, and social media personality. She is definitely best known to the world for her long-term presence in the media due to her romantic involvement with various celebrities, such as Rob Kardashian, Tyga, Game, Johnny Winn, and P. J. Tucker. She has also had a number of personal successes throughout her often lucrative modeling career in the last decade.

Where is Blac Chyna from?

Blac Chyna hasn’t disclosed any details on the matter of her ethnicity, although it’s apparently not Caucasian; her ethnic background will remain unknown, but she is of American nationality.

Chyna was raised an only child in her birthplace by her father Eric Holland and her mother Shalana-Jones Hunter (Tokyo Tony), of unknown descent and professions. As for her education, she attended Henry E. Lackey High School, from where she matriculated in 2006, after which she furthered her education in Miami, by attending Johnson & Wales University. Though it is unknown what degree she was pursuing, there is the fact that she started stripping in Maryland in order to pay for her college tuition. Prior to that, it is known that she worked at a beauty salon, but she quit because the salary was too low to cover her expenses. Although she was making enough money to pay for college with her new job, it was leaving her exhausted, and she ended up falling asleep in many lectures. Eventually, she dropped out of college and started pursuing her stripping career full-time.

Career: From a Stripper to an Entrepreneur

Chyna’s rise to fame arrived along with the release of Drake’s collaboration with Lil Wayne, entitled “Miss Me”, mentioning her in the lyrics – the line goes ‘Call up the king of diamonds and tell Chyna it’ll be worth the flight’. Prior to that, Chyna had a few modeling stints, such as landing on the cover page of “Dimepiece” magazine, which was followed up by a photoshoot for “Straight Stuntin Magazine” and “Black Men’s Magazine.” After Drake’s promotion, her social media network popularity skyrocketed, and she ended up being Nicki Minaj’s stunt double in her music video entitled “Monster”, alongside Jay-Z and Rick Ross. In 2011, she was named Model of the Year at the Urban Model Awards, and was at the same time cast as the lead model for Tyga’s single entitled “Rack City.” In 2012, she was featured on the cover of “Black Men’s Magazine” again, as well as titled ‘Eye Candy of the Month’ by “XXL Magazine.” In the same year, she also posed for “Urban Ink” and “Smooth Girl” magazines, meanwhile landing a role in another single by Nicki Minaj, entitled “Come On A Cone.” In 2013, she launched her own brand entitled “88fin”, while she also graduated from JLS Professional Makeup Artist School. Subsequently, she launched her own lash line entitled “LASHED by Blac Chyna.” Lastly, she also has a beauty bar in Los Angeles, where young makeup artists go to get training.

As for her romantic involvements, her first public relationship was with the rapper Tyga in 2011, initiated during the shooting of his “Rack City” music video. On October 26th, 2012, Chyna gave birth to their son King Cairo Stevenson, after which Tyga bought a $6.5 million house for them in Calabasas, California. However, they split up in 2014, and Tyga then began dating Kylie Jenner, which caused a public war between Chyna and Kylie.

However, she kept her relationship with the other Kardashians polished and subsequently began spending time with Rob Kardashian, whom she met in January 2016, three months after which they announced their engagement, and in May the two announced that they were awaiting a baby, subsequently born on 10th of November 2016, named Dream Renee Kardashian. However, she and Rob broke up only a month in unspecified circumstances. She hasn’t had any more kids, and it is unknown who she is dating now. 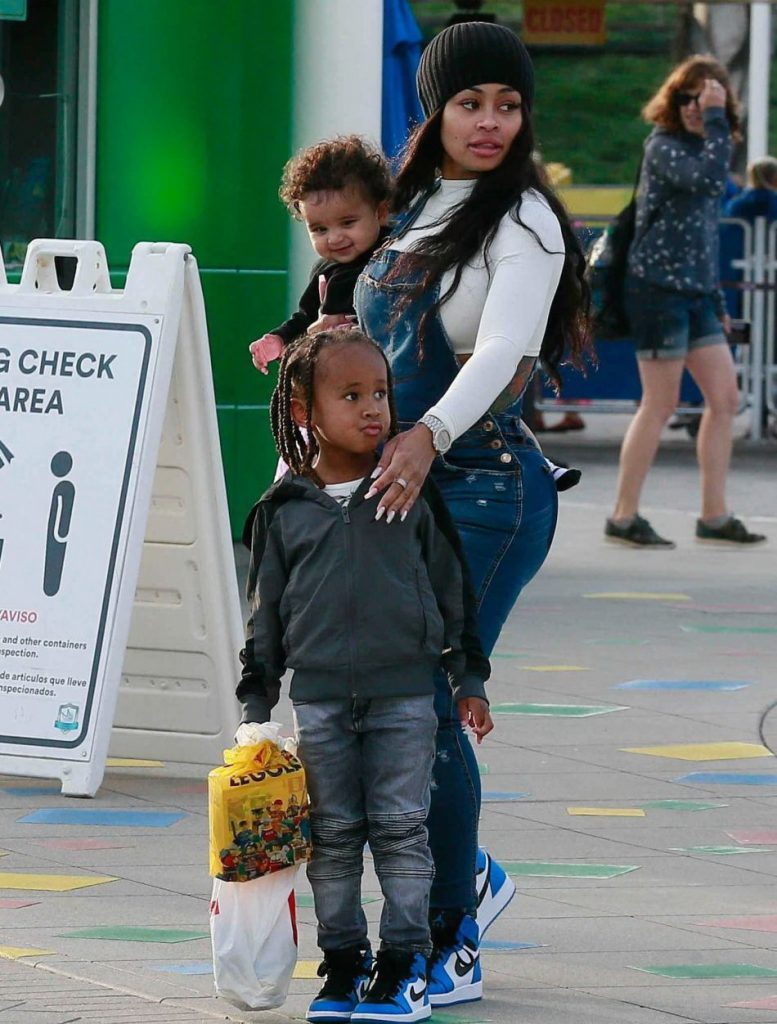 What is Blac Chyna’s Net Worth?

Have you ever wondered how rich Blac Chyna is, as of mid-2018? According to various authoritative sources, it has been estimated that the current total of Chyna’s accumulated wealth is close to $4 million, made primarily as a stripper and entrepreneur, in addition to the benefits as the girlfriend of two big-time celebrities, Tyga and Rob Kardashian. As her career continues to develop, the said amount can be expected to increase.

Concerning the physical attributes of the experienced stripper, her vital statistics are 38-27-44, while her height is 5ft 2ins (158cm) and her current weight is 123lbs (56kg). Her body shape is generally described as voluptuous, while her hair color is bleached white and her eyes are dark brown. Additionally, her breast size is 32F and her shoe size is 8.

Due to the major influence of social networks, it is nowadays a regular thing for active celebrities to nourish a close and active relationship with their fans, for the sake of increasing the popularity of the projects they’re working on, and thus their own net worth. Chyna herself seems to be a regular subscriber, if not the leading example of this celebrity trend, as her presence is ubiquitous on most of the popular social media networks. Her Facebook page has almost two million followers, her Twitter account is over 850,000, and her Instagram account has almost 15 million fans.